So, I am really late in writing this, but, Abraham's birthday party was a huge success! Most of you have probably seen all the pictures I posted on Facebook from the party, but I wanted to post here specifically about the theme and decorations. I chose a book theme, The Very Hungry Caterpillar, one of Abraham's favorites. If you have kids and haven't read this one already, I highly recommend it. Basically, the hungry little caterpillar eats through different foods each day until he gets big and fat and turns into a butterfly! For the party, I got some great ideas from around the web and tried to do everything as cheaply as possible. I really had a lot of fun putting my creativity and (lack of) artistic skills to work. First up, the invitation. I just printed it out on card stock with images I found online and used a hole-puncher on the fruit. Then I used a little round sponge brush and some paints to make the caterpillar at the bottom.

Next, decorations. I spotted this caterpillar and decided an easier/cheaper version would be with balloons. Crazy easy to make and Abraham LOVED it. It lasted for a week or so after his party, until he asked me to dismantle it so he could play with the balloons. Decorations AND toy!

Then Abraham and I painted some decorations in our version of Eric Carle's style: the sun and butterfly from the story.

And I created a photo display with one photo from each month of his two years of life! It turned out so adorable that I MAY still have it hanging up over a month later...


As our guest book, we asked everyone to sign Abraham's copy of the book. This will be a great memento for him to keep of his 2nd birthday party.


Here are the party favors. I saw these cute little lollipops at a toy store that reminded me of the book, so they became party favors. Then I copy/pasted some images of the caterpillar and fruit and printed them out on magnetic paper to make a cute little magnet set based on the book. This was actually a lot more time-consuming than I anticipated, because I wanted to arrange the fruit just right to get maximum numbers on each page and then had to cut them all out afterward. But it turned out really nice, so I'm glad I went for it. Rounded up the gift bag with a little pack of markers from Target. 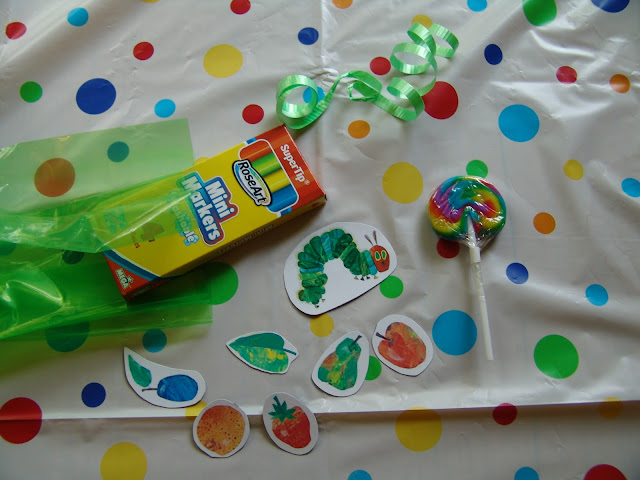 Next up, the caterpillar feast! I got this idea from another caterpillar party featured here. Basically, I chose the foods from the book, laid them out in order, and put a little label for each one that included the photo and text from the book. The feast was a big hit with kids and adults alike, and just happened to include many of Abraham's favorite foods. I included little transition cards in between to include the rest of the story. 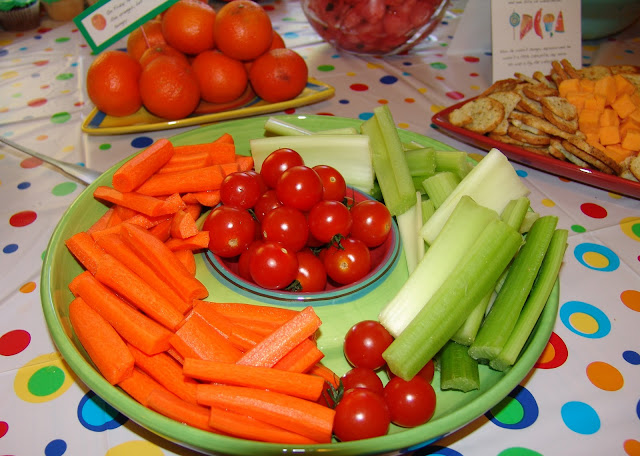 Here is the big, fat caterpillar! I found this cake and did my own version. The picture doesn't look that great to me, but it turned out cute. A little less professional looking and more "homemade." :)


Party activities included a caterpillar tunnel (it had a caterpillar face on the end, but I didn't get a lot of pictures of it for some reason), an apple ball toss (apples hand-painted by my husband in the style of Eric Carle), and my favorite, the "Paint a Butterfly" station. We also had the water table out and some other outdoor toys that were a lot of fun. 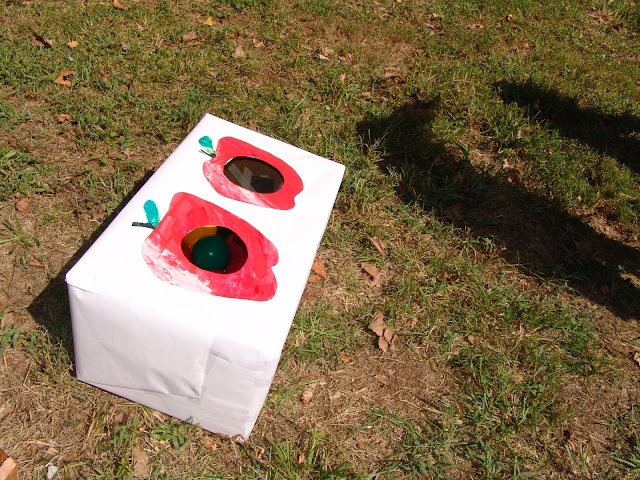 We had a lot of fun celebrating with our friends, and it got me in the mood for more party planning! Why wait for a birthday? The one thing I wish I had done was actually read the book, The Very Hungry Caterpillar, at the party, because it turned out several people weren't familiar with it. To me it's such a classic that I just assumed everyone was familiar with it. But other than that, the party was great. Thanks to everyone who came and celebrated with us!

Abraham spilled some water on the porch while watering the plants then splashed in it a bit and started walking around, making "print feets." I love it!
Posted by Shereen at 10:09 PM No comments:


Little by little, wean yourself.
This is the gist of what I have to say.

From an embryo, whose nourishment comes in the blood,
move to an infant drinking milk,
to a child on solid food,
to a searcher after wisdom,
to a hunter for more invisible game.

Think how it is to have a conversation with an embryo.
You might say, ‘The world outside is vast and intricate.
There are wheatfields and mountain passes,
and orchards in bloom.

At night there are millions of galaxies, and in sunlight
the beauty of friends dancing at a wedding.’
You ask the embryo why he, or she, stays cooped up
in the dark with eyes closed.
Listen to the answer.

There is no ‘other world.’
I only know what I’ve experienced.
You must be hallucinating.
-Rumi
Posted by Shereen at 10:50 PM No comments:

And then I melted

Last night was a little bit of a bedtime struggle. So it's way too late and I'm lying in bed with Abraham, trying to help him fall asleep. Then he rolls over and gives me a big hug and says, "I love you. We're friends, Mommy."
Posted by Shereen at 3:51 PM No comments: