A delicacy in some parts, I hear

As you may have heard, the world is ending this Saturday. I'm realizing now that there have definitely been some signs! For instance, the plague of locust at my house. 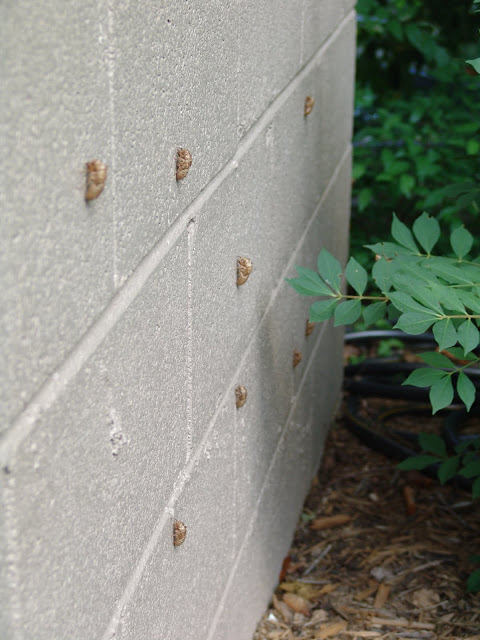 Okay, cicadas, whatever. The point is, science is crazy and freaky! It started with all of a sudden over night hundreds of the exoskeletons or skins or what have you (pictured above...and below) attached to our house and trees and bushes. 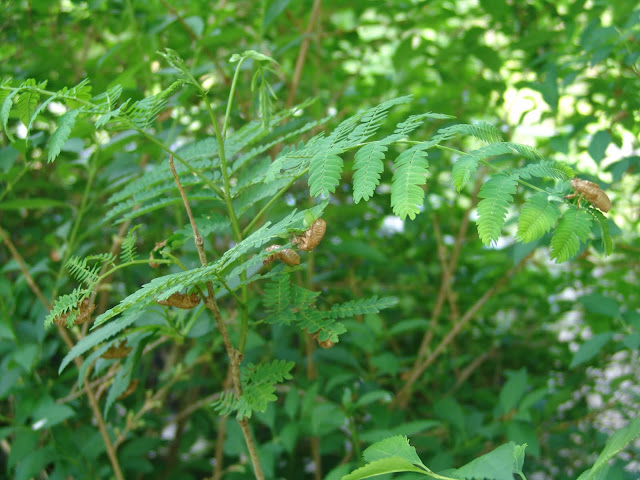 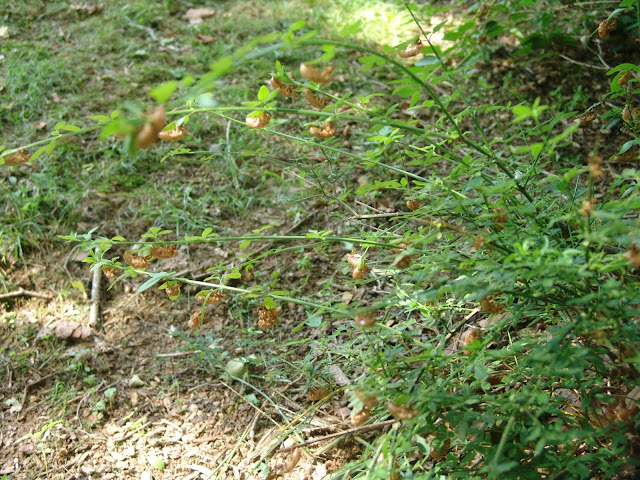 Seriously, EVERYWHERE. So many. These pictures don't do it justice at all. At first we only saw a few of the actual adult bugs, but then, unbelievably, even more crunchy skins everywhere and now swarms of adult bugs! They are slow and big and gross and everywhere and LOUD. 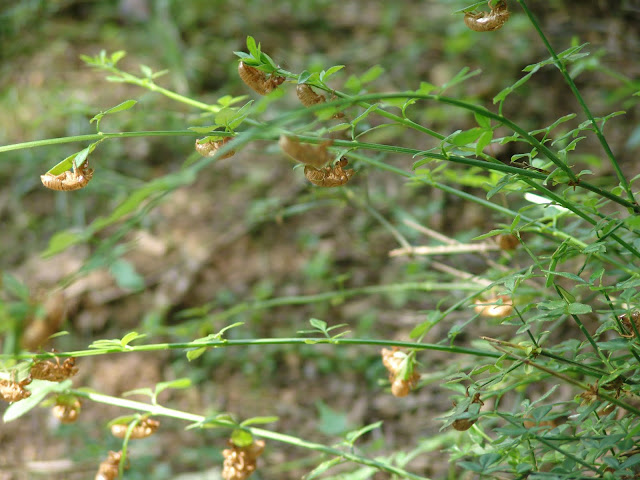 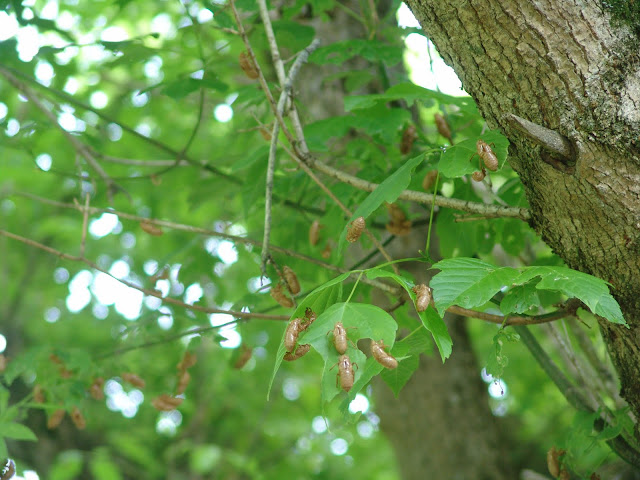 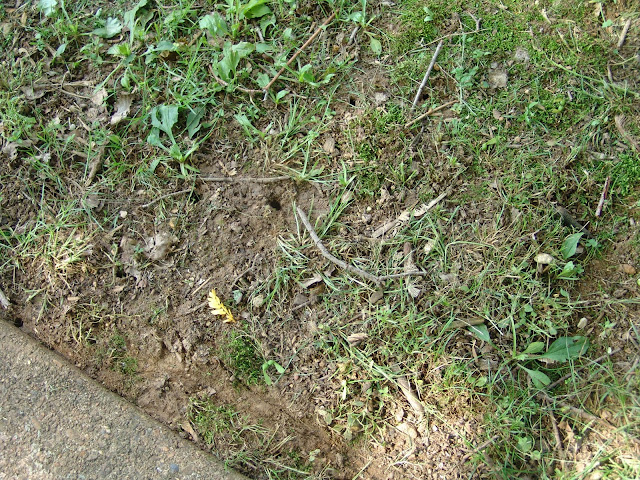 So we did some research, and it turns out they have a 13 year life cycle. So for 13 years they live underground, and then come out just once to mate and die. The picture above shows the holes that are all over the ground where they have emerged. Thinking of suing for property damage. 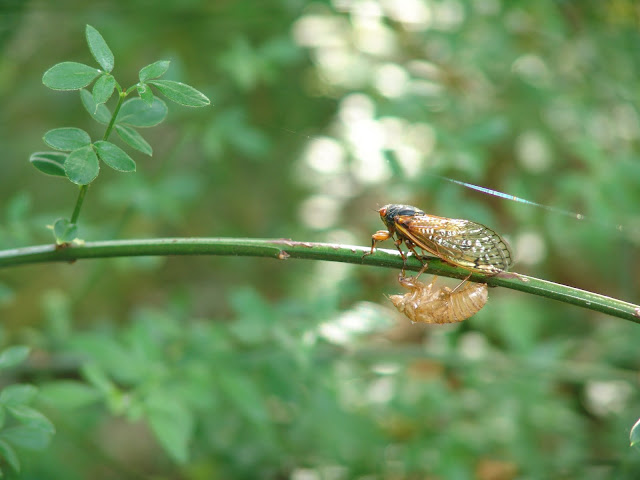 Here's what the adults look like. Luckily, they are pretty harmless. They don't eat the plants or bite or anything. They just swarm and then die all over your porch. 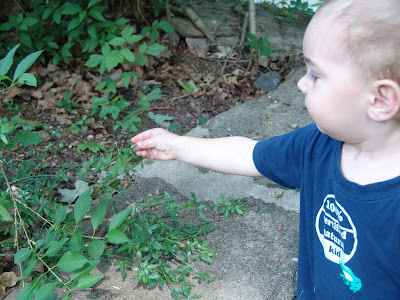 I showed the little bug shells to Abraham, and of course he didn't know that they're gross, so he picked one up immediately... 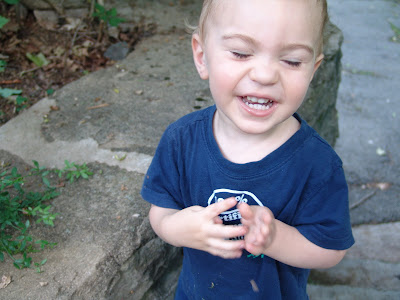 And smashed it gleefully between his hands.
Posted by Shereen at 10:10 PM No comments:

I was cooking corn for dinner, boiling it still in the husk, and Abraham wanted to see what I was making. So I held him up, he pointed, and I told him it was corn. But then I realized that maybe he had never seen corn in the husk before, and I was trying to think of the word "husk" so I could explain it to him.

I had to laugh. Poor kid, his mom can't even remember what water is called.
Posted by Shereen at 8:55 PM No comments:

I read this blog post today about what the author calls a "toddler mind map" - basically a visual representation of all the things that are important to the toddler at the time. This is such a cute idea to me, mainly as something to look back on and remember what Abraham was like at different ages. So I want to draft a little list while the thought is with me of things that I might include. I really like the idea of it being visual so that he can enjoy it as well, but this will be a first step.

These are the things, people, events, etc that he is very into right now. He might express it through his conversation ("incoherent toddler speak HAMMER incoherent toddler speak"), choice of activity, or by CONSTANTLY asking me to tell him about things. He asks by pointing to my mouth and saying, for instance, "moon." This means I have to tell him about the time (like a MONTH ago) that he saw the moon outside in the sky and said he wanted to hold it, but it was too far away and he couldn't reach it. Then I have to tell him more about how he can be an astronaut and fly to the moon in a rocket (including count down and blast off) and then walk on the moon and find moon rocks. He especially likes the part about the moon rocks. He asks me to tell him about the moon nearly every day, often more than once, and always (Lord help me) more than once in a row. There is really only so much that one can say about the moon, I have learned.

So here goes! Abe's 19-month-old brain, in no particular order:

I'm sure I will think of another thing or two later, but this is a lot, actually. Especially if I have to draw it all. Maybe I can just use clip art... Oh technology, how lazy you make me!

PS - What a cute baby! What a good idea! I can already tell that even just 6 months from now I will love reading this list and remembering his little quirks and interests.
Posted by Shereen at 10:08 PM No comments: