Finally, the madness has ended. The beast, once garrulous and thrashing, now lies in repose, snugly curled in his Baby Bjorn. We sigh and smile with relief, feeling freedom trickle down our spines. We laugh and jest around the fire, secure that the hour is ours. Suddenly, amidst the merriment, I am struck--frozen in my tracks at the sight of a single eye peering ominously from the shadows. The beast, though still motionless, has awakened and prepares to take back what is his...our lives.
Posted by Shereen at 10:30 PM 1 comment:

Whoo hoo! First Super Bowl ever for them Saints! Is Super-Bowl hyphenated? All one word? Or did I do it right the first time? Also, what is a halfback?
Posted by Shereen at 9:49 PM No comments:

This baby has been pooping all morning. I'm serious! It's like a game. Like Double Dare, where one contestant has to fill a cup up with kool-aid using a water gun while perched on top of a ladder while his opponents throw cream pies at him. Except in this scenario, the cup is a diaper, the kool-aid is poop, and the cream pies are also poop. This is probably the cause of his major grumpy pants today, as well as my own larger pair of grumpy pants that I started wearing in the middle of the night when I couldn't sleep even though el bebe was zonked out.

So to cheer us both up, I decided to go for a walk. Ham LOVES walks, more so if being held, but also in the stroller. And I'm beginning to think I'm more irritable when I don't leave the house all day. So a walk was the perfect remedy. Yes, Nashvillians, it is a rainy day. But it was not raining when we embarked on our sojourn. In my haze of sleeplessness and diaper fatigue, I ignored the obvious implication that, really, IT COULD RAIN AT ANY MOMENT. I think you see where this is headed. I could have just walked up and down our street, staying close to the house, but due to aforementioned haze, I went on our regular route down a side street. I was...oh...half a mile or something from our house. (I have no concept of distance. Does half a mile sound really far? Or too short? It was somewhere in between. Let's say I was about 7 walking minutes from the house.) And it starts to sprinkle. Luckily, the stroller has a cover, but since we're walking into the wind, that really only protects Abe's face. The rain gets harder and is getting all over my baby! I start running a little, but, friends, we all know, that lasted only ten seconds or so before my body slowed down in protest. So we did a little jerky walk-jog back to the house. Luckily, it rained hard, but did not pour, and had almost stopped by the time we got back home, so we are wet, but not drenched. Interestingly enough, Abe does not seem to care a bit.

He also does not freak out when he takes a shower for the first time, as I kind of expected him to. No, water does not make him cry. The tears came during the drying portion of the story. THEN he decides to Freak Out. He just doesn't understand that his neck will stink if I don't dry under all the fatty folds. Wow, that sounds really gross now that I'm writing it, but he is still adorable and clean, I promise. It's juicy baby fat, that's all!
Posted by Shereen at 4:17 PM 2 comments:

Bananaphone: It's a phone with a-peel!

Have you ever noticed that when you eat something spicy – I mean, really, painfully spicy, like the deadly but delicious salsa I made the other night – that even though it burns with the fire of a thousand dying suns and sends you frantically looking for something, anything, to put in your mouth that will stop the unholy flames leaping from your tongue, it also kind of feels good? Or is that just me? If I stop the immediate urge to quench the burning and instead just KEEP EATING the salsa, and then when I finally stop because I realize I have consumed almost a whole bag of chips, I let the spice overtake me, like some crazy hippie drug. My eyes water, my nose runs, and my whole head becomes feverish. Then there’s some sort of strange euphoric sensation that pours over my head and down my spine, making me want to roll my head around in catnip. Then the burning in my mouth stops and I’m left feeling just feverish and pleasant. I’m sure this is a real sensation that actually has a name, to describe why your body turns spicy foods into drugs. Survival mechanism?

As I’m sitting here in my kitchen busy working,* I suddenly noticed smoke right outside the kitchen window. I mean, RIGHT outside, as though the part of the house immediately below the windows was on fire. But, since I am incredibly smart and quick-thinking, instead of panicking, I immediately realized that I had just started the dryer in the basement, which vents below those windows, and since it is currently too cold to be alive, heat makes steam! Or something like that. So all is well.

…Or, I am incredibly dumb and cavalier about my family’s safety and sat writing a blog entry while the lower half of my house burned. I guess we’ll see which it is! Update tomorrow! (Still not going to check it out, in case you didn’t pick up on that.)

*playing on the internet

Posted by Shereen at 3:09 PM No comments:

Most of us
still
sleep
knees curled to chest
comfort womb memory
from our previous life.
What do we not remember
that
still
shapes us?
Posted by Shereen at 10:16 AM No comments:

it's the most wonderful ham in the world

So, just gotta say, too cold to be alive right now.  It's 18 degrees! Yikes! I could not cut it living in some northern state that actually gets negative degrees regularly. Nooo way. Of course, I would probably have a more efficient heating system if that were the case, but still. I am so unproductive when it's cold. I want to just stay in bed all day. And eat warm things.

In other news, Christmas was good. We traveled and introduced Baby to relatives he hadn't met yet. Yesterday was Anderson's first day back at work, and thus my first day alone with lil' ham in two weeks. I see now that our culture has it all wrong with nuclear families. Extended family living is the way to go! For two weeks, wherever I went, there were other people who wanted to hold the baby, play with the baby, change the baby. I actually got to take a shower practically every day and eat a few meals with two hands and for longer than five minutes! Pretty amazing. I wonder if that's why motherhood seems to be so difficult - you're doing a job alone that really requires many hands. If you want to stay sane, anyway. Luckily I have the best baby ever. 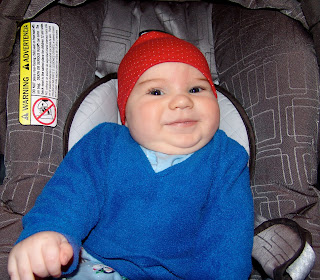